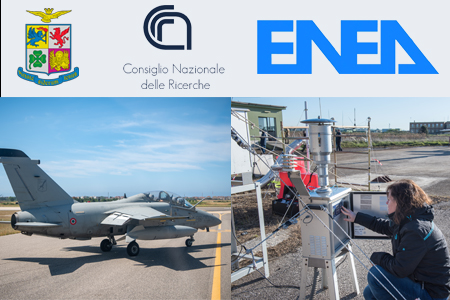 The tests were conducted at the Aeronautical and Space Experimentation Air Division (DASAS) of Pratica di Mare on an AMX fighter by pilots and specialized personnel of the Air Force, belonging to the Experimental Flight Department and the Aeronautical and Space Materials Technology Department. of DASAS itself, downstream of a preliminary study and experimentation activity carried out in collaboration with researchers from ENEA and three institutes of the CNR (the Institute on Atmospheric Pollution - IIA, the National Institute of Optics - INO and 'Institute of Sciences and Technologies for Energy and Sustainable Mobility - STEMS).

The experimentation is part of a Cooperation Agreement between the Aeronautica Militare, ENEA and Cnr launched in 2017 thanks to a loan from the then Ministry of the Environment and the Protection of the Territory and the Sea, now the Ministry of Ecological Transition (MITE) in production of biofuels and their use in the aeronautical field, a collaboration that has led to the achievement of important objectives in the context of the ABC project (Aerotraction with Biofuels). This agreement, in addition to the study and updating of sector regulations, provided for various ground engine tests to verify the performance of fossil fuel mixed with biofuel at different percentages (from 20% to 25%). It also made it possible to compare the levels and types of emissions of the different blends with those of traditional fossil fuels, as well as to carry out numerous compatibility tests of pure biofuel, at different concentrations, with the metal and elastomeric materials of aircraft, to exclude any problems with the engine or plastic parts.

For the realization of the experimental flights, the chemical staff of the Aeronautical and Space Materials Technologies Department (RTMAS), in collaboration with the Technical Control Laboratories of the Support Service of the Logistic Command, conducted a preliminary series of chemical-physical qualification analyzes. and certification of both the fuel of biogenic origin, acquired under the Cooperation Agreement, and the fossil fuel specifically selected for blending. Finally, with the contribution of the DASAS Technical Operational Support Department, the micro batch of biofuel mixture used to refuel the AMX aircraft during the tests was created. The two flights carried out - the first with 20% mixing and the second at 25% - were planned and conducted by the Flight Experimental Department, which also collected the engine performance data. ENEA carried out the preliminary study of the plant matrices which allowed to identify the most suitable one for the production of aviation biofuels. In addition, she worked on the characterization of aircraft emissions in ambient air together with the toxicological assessment for the estimation of economic sustainability.

All the study and experimentation phases of the project, which represents a milestone in the path towards the ecological transition in the military field, were conducted in line with the indications and authorizations of the Directorate for Aeronautical Armaments and Airworthiness (DAAA) and the General Secretariat of Defense / National Armaments Directorate.

The study and experimentation activities carried out represent a piece of primary importance in the broader path that the Air Force has undertaken and is supporting in the research and implementation of effective solutions for the performance of institutional tasks in a global context that is increasingly sensitive to issues of environmental sustainability, energy efficiency and security and the so-called capacitive resilience.

Zelensky wants to go back to the borders of February 24th. G7: "Aid until the necessary time"