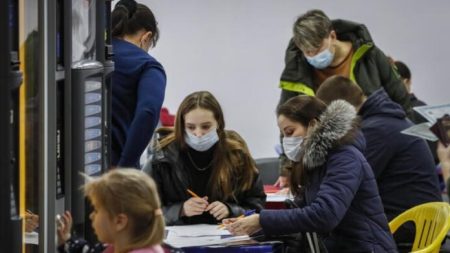 epa09776958 Refugees from the self-proclaimed Donetsk People’s Republic rest at the temporary accommodation centre in Taganrog, the Rostov region, Russia, 22 February 2022. Russian President Vladimir Putin on 21 February convened an extraordinary large meeting of the Russian Security Council, which discussed the recognition of the self-proclaimed Donetsk People’s Republic (DNR) and Luhansk People’s Republic (LNR). On the same day, the president made a decision and, during his video message to the citizens of the Russian Federation, signed a decree recognizing the independence of the republics of Donbass, as well as an agreement on friendship, cooperation and mutual assistance. The President instructed the Russian Defense Ministry to ensure the maintenance of peace by the Russian armed forces. The Russian Foreign Ministry should establish diplomatic relations with the DNR and LNR. EPA/YURI KOCHETKOV